To an outsider, it can often look like mob rule in Pakistan. There are public lynchings and frequent attacks on religious minorities and nobody ever seems to get arrested or go to jail. But running and renting out mobs is also an organised business in the country, where the men organising the mobs insist they are providing a vital public service and anything is available – at the right price.

An old man with fiery red hair, Khwaja, lounges on a rickety rope-woven bed and speaks to a rapt audience. These are all men from the area, many of them wearing prayer caps and sporting beards. He has gathered more than a dozen in just a few minutes, armed only with a cell phone and a little black book full of numbers.

“Gathering a mob – what’s so difficult about that?” he says. “One phone call and a hundred people will come, they can throw stones till nothing is left and if that doesn’t work, it costs very little to buy 10 litres of petrol and set things on fire.”

A few months ago, Khwaja brought together a protest mob that blocked the railway lines till the authorities were forced to accept their demands. What looked like a mass protest against gas shortages was organised by one influential man. In a country where many of the people still don’t have access to basic necessities, there is power in numbers, and men like Khwaja claim to wield this power. 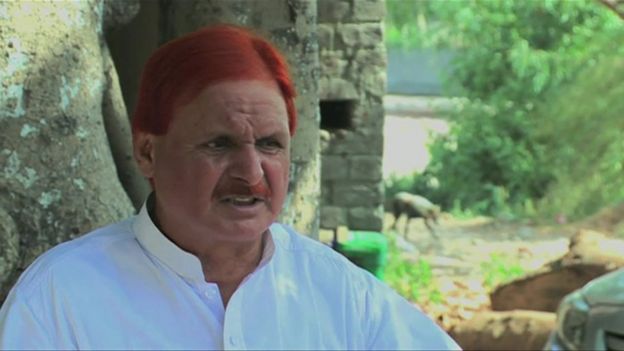 “When government officials fail to deliver on the legitimate needs of the people, then they come to me for solutions. Now the people of my area have more trust in me than the government.”

Religion is often used as a rallying cry to stir up sentiments among people influenced by increasing religious radicalism in the country. Khwaja’s huge compound contains the only mosque in the area and he chooses the prayer leader himself. His mosque, his cleric, his rules, he says.

Men like Khwaja are known as patrons or “Dera daars”. Khwaja insists that he uses his religious influence, connections and political clout for the good of his community, but admits others have exploited mob power for their own purposes.

He explains: “It doesn’t take much to gather hundreds against someone you may have a personal enmity with. If they are from a religious minority, you just say they committed blasphemy or burned the Koran, and everyone will follow, no one will verify the truth of it.”

‘Failure of the police’

Last year an angry mob attacked the homes of Gujranwala’s Ahmadiyya religious minority, not too far from Khwaja’s area. Locals say it started as a fight over a game of cricket but as tempers flared, a young Ahmadi boy was accused of religious blasphemy, a crime punishable by death under Pakistani laws.

But the matter never went to court as hundreds of people burned down more than a dozen houses of the community in retribution. Three little girls and their grandmother were burnt to death as the police failed to control the violence. The scorched houses lie abandoned, huge padlocks on the doors, as survivors are too afraid to return home. 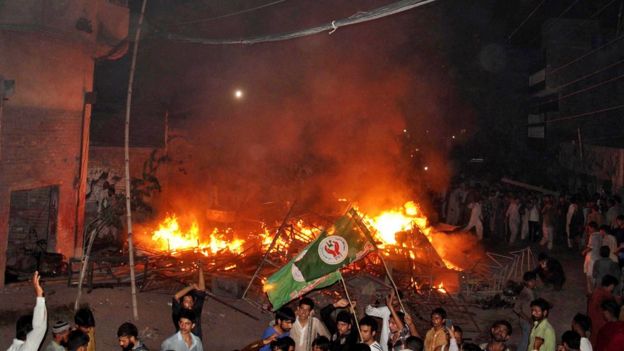 Mob violence and public lynchings have become a common form of persecution, particularly against religious minorities in Pakistan.

Last November, a young Christian couple in the Punjabi village of Kot Radha Kishan was attacked by a mob after accusations of blasphemy. They were publicly lynched and thrown into the furnace of the brick kiln where they worked.

Similar incidents are on the rise across Punjab, but there are few arrests and fewer convictions. Police officials often stand by, unable or unwilling to control angry religious mobs, preferring to deal with the aftermath. 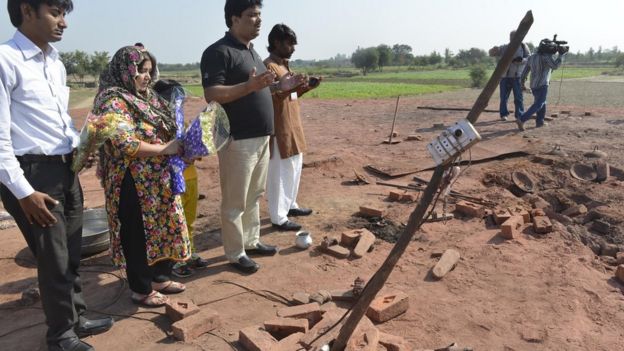 Punjab Police Superintendent Sohail Sukhera says: “It starts off as 10 angry people, then 20 and finally hundreds… the situation now is that mobs are burning people alive in front of the police, which I think is a failure of the police, the state and our society.”

The BBC secured exclusive access to one of the many crime dens that claims to be running a “mob for hire” business, renting out people to instigate and participate in mob violence.

We are led into a compound on the outskirts of the city where some muscular men are sitting down to a hearty breakfast. Others are cleaning their Kalashnikovs.

Surrounded by armed men, the leader of the group or “mob boss” as he is called here, is closing a deal on an expensive cell phone.

“Hard cash only,” he is heard saying. “It takes cash to arrange for the men and the vehicles, and they need weapons.”

He tells me his clients need his services mostly to settle personal vendettas or for land grabbing, but it is easier to give everything a religious overtone to gain popular support and pressurise the police into doing nothing. 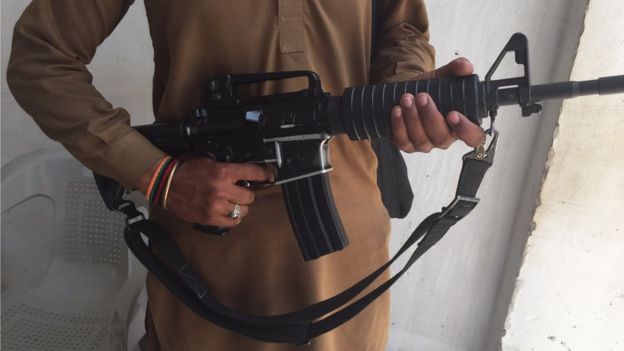 “We are often hired by religious militant organisations for various tasks – if they want to straighten someone out or send a message, we can find the men to do that. Our men are used in political protests or to fill out political rallies, whatever is needed.”

Many militant Islamic organisations have been banned in the Punjab as part of the government’s efforts to curb terrorism and radicalisation – but the mob boss says it is easier to operate behind the scenes, by hiring mercenaries like him, with no direct links or affiliations.

Like any professional business, he has a list of services, and prices go up with the intensity of violence.

“Burning and lynching will cost extra, we have to pay off all kinds of people to avoid trouble,” he says.

Another individual involved in the business says: “We recruit desperate men, poor labourers sitting at road junctions seeking daily wages. We offer them up to 1,000 rupees ($10; £6), food, transp  ort and the  reassurance that we will get them out if they are arrested. We have those connections.” 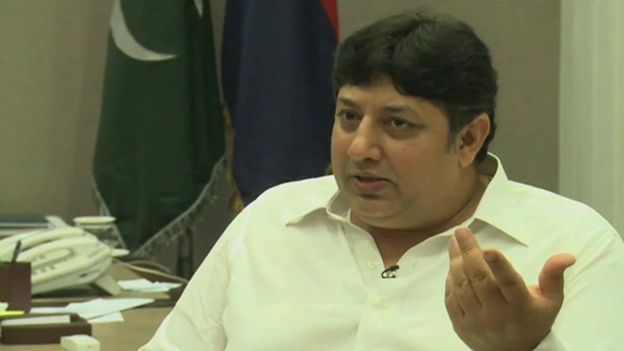 Police Superintendent Sukhera admits such backchannels to local mobsters exist. These mobsters often have strong political support and stronger influence than the authorities.

He says: “What we are seeing is a parallel system of governance. The police are often helpless, because we do not get the protection to apprehend these mobs.

“When we try to stop them through the means necessary, often cases are lodged against the police officers themselves. Why would a police officer put his life and livelihood at risk for others, if he gets no support?”

Psychological experts believe that social unrest is on the rise and tolerance diminishing in a country dealing with the impact of decades of terrorism and growing religious radicalism.

As public confidence in the government’s ability to tackle rampant socio-economic problems is eroded, a sense of frustration and anger has emerged. And harnessing that anger to serve ulterior motives appears to have become big business.

media
Previous PostThe (Non)Free Exercise of ReligionNext Post3 Ahmadis belonging to the same family were attacked in Karachi
We are using cookies to give you the best experience. You can find out more about which cookies we are using or switch them off in privacy settings.
AcceptPrivacy Settings