Chairman of Pakistan Peoples Party (PPP) Bilawal Bhutto deleted a tweet on Tuesday in which he had endorsed equal rights for the country’s minority Ahmadis.

Bhutto posted the original tweet back in 2013 in response to the arrest of an Ahmadi man for reading the Quran. 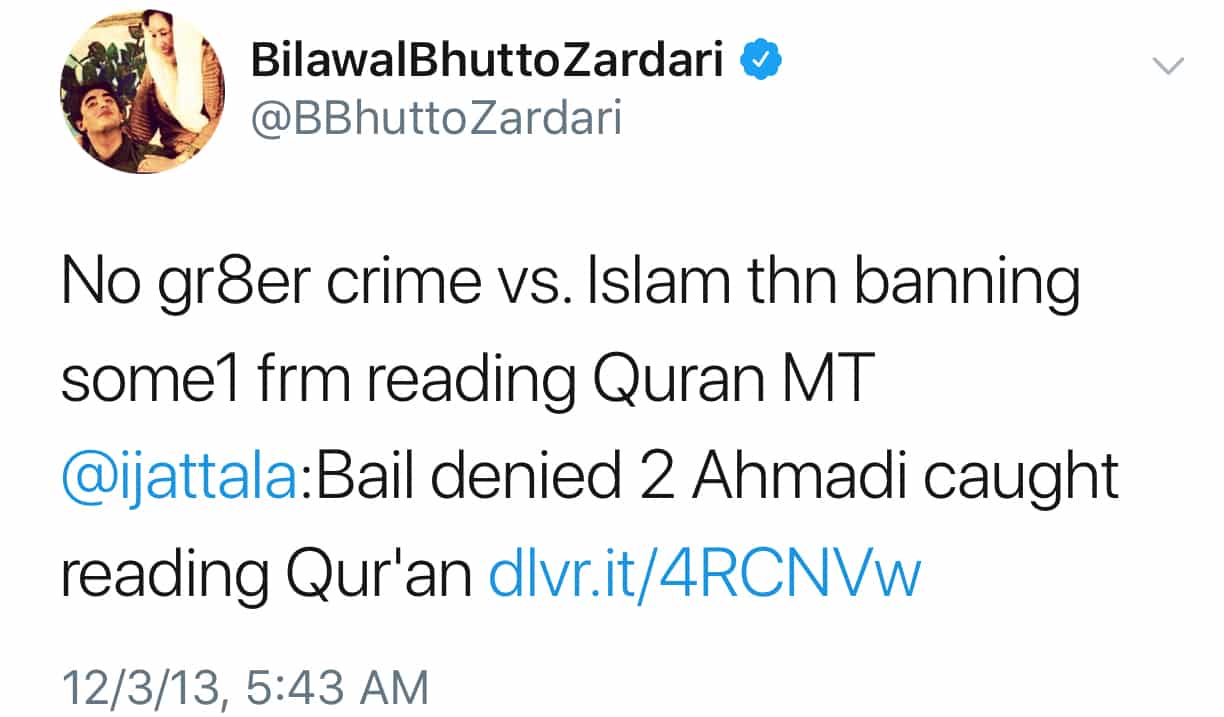 “No greater crime vs. Islam than banning someone from reading Quran, @ijattala: Bail denied to 2 Ahmadi caught reading Quran”

The tweet once again caught the attention of rights activists after a renewed campaign against the Ahmadis in the country.

The link in the tweet detailed the arrest of an Ahmadi man by Pakistani authorities. In 2013, 72-year-old Masood Ahmad was arrested for reading verses from the Quran, considered blasphemous under the country’s strict anti-Ahmadi laws.

Bilawal Bhutto is the son of slain Pakistani Prime Minister Benazir Bhutto and currently leads Pakistan People’s party (PPP), a political party his grandfather founded in 1967. It was also his grandfather who introduced the controversial law against the minority Ahmadis in 1974.

The constitutional amendment declared the Ahmadis ‘non-Muslim’. Z.A. Bhutto was hanged by his successor General Zia ul Haq. Despite Haq’s political differences with Bhutto, he carried on his drive against the Ahmadis and made it criminal for the Ahmadis to profess their faith as Islam or identify as Muslims.

Bilawal’s mother Benazir also continued her father’s crusade against the minority Islamic sect. In 1989, she refused to meet Dr. Abdus Salam, Pakistan’s only Nobel laureate because of his Ahmadi faith.

In 2016, the former PM of Pakistan and another key leader of PPP Raja Parvez Ashraf boasted of “breaking the neck” of the tiny Muslim group.

In 2017 Pakistan’s Permanent Representative to the United Nations Maleeha Lodhi was fiercely criticised for deleting a tweet congratulating Oscar winner Mahershalah Ali, who is an Ahmadi Muslim by faith.

In the past, Bilawal Bhutto has claimed that his party, the PPP, stands for religious freedom and minority rights in Pakistan. But removal of this particular tweet after 5 years has left rights activists concerned for the fate of the marginalized Ahmadiyya community.

“The deletion of the tweet sends a message to the Ahmadis that if the Bhutto’s come into power during the next election cycle, the Ahmadis will not be seen as equal Pakistanis, that their rights will continue to be trampled upon. PPP’s policy of appeasement of religious extremism and the Bhuttos’ family history of oppressing the Ahmadi Muslims shall continue. This is the message Bilawal wants the religious extremists to know so they could vote him in. It is a policy of political greed over principle, apartheid over religious freedom. Its a shame.”

Previous PostTerrorism wanes in Pakistan, but religious fervor threatens national unityNext Post[Report] United States Commission on International Religious Freedom (USCIRF) – 2018 Annual Report
We are using cookies to give you the best experience. You can find out more about which cookies we are using or switch them off in privacy settings.
AcceptPrivacy Settings